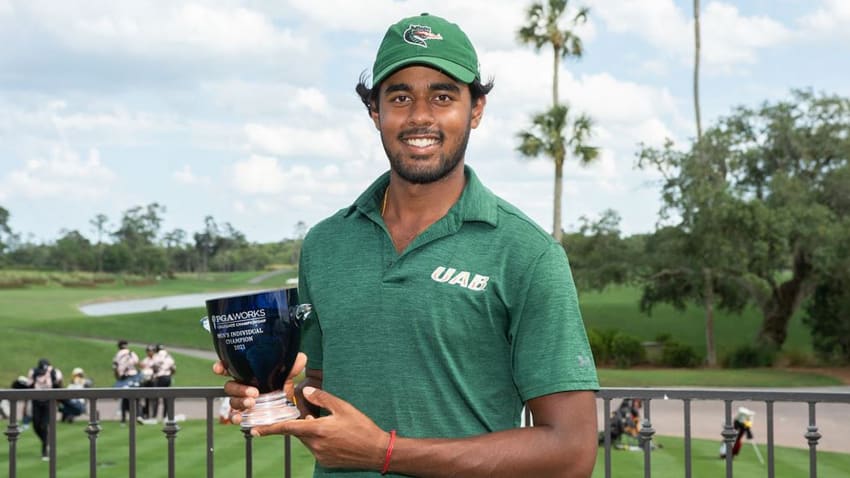 Prairie View A&M University golf coach Kevin Jennings has an expansive history with what is now the PGA WORKS Collegiate Championship. He played in the event when it was the National Minority College Championship while he still was a high school student, competed as a college player and coached Talladega College to a title in what was then the NAIA Division for smaller schools.

Never before had he won the Men’s Division 1 title at PGA WORKS, however. Until Wednesday. On a windy and difficult day on one of the toughest, most historic tracks on the PGA TOUR – the daunting Stadium Course at TPC Sawgrass – Jenning’s Panthers came from behind, first catching Howard University and then holding off hard-charging Alabama State to capture the title. Prairie View, three-time champions of the Southwestern Athletic Conference (SWAC), shot 18-over 306 on the Stadium on Wednesday, an effort bettered only by Alabama State (303). Florida A&M and Howard, the 36-hole leader, finished third and fourth, respectively.

“I put on the back of our t-shirts, ‘Trust the Process,’ and it’s strange how things work out from time to time,” Jennings said. “Yeah, it’s a great feeling. … It just feels great to be with these guys and have some success. This is a good group.”

In the Women’s Team Division, Texas A&M-Corpus Christi cruised to a 28-shot victory over Delaware State. The Islanders shot 24-over 312 on the Dye’s Valley Course, led by Lucy Martinez, who shot a final-round 74. Delaware State’s Baipor Khunsi (5-over 221) was the division’s medalist, edging Madison Lake (Texas A&M Kingville) by four shots.

“Yesterday, when we played the Stadium, I was walking the fairway of 16 and saw all the people and the cameras, and I was like, ‘I feel like I’m on the PGA TOUR,” said Martinez, a sophomore from Aguascalientes, Mexico. “It was so awesome.”

Phu Khine, a junior at UNC-Wilmington from Myanmar, shot 76 on the Stadium for a three-round total of 2-over 218 to win the Women’s Individual title, while Khavish Varadan of University of Alabama-Birmingham won the Men’s Individual crown.

Varadan, a freshman, had not seen the Stadium Course since competing on it four years ago in the Junior Players Championship when he was 17. He would put together the most impressive stretch of the week. Teeing off on the 10th hole at the Stadium Course early Wednesday, in winds blowing to 15 mph, he played his first eight holes in 5 under par. He got up and down for birdie at the par-5 11th; birdied 13 (8 feet) and 15 from in tight; got up and down from the left side of the par-5 16th for birdie; and hit a knocked-down gap wedge that released to 8 feet at the island 17th. The birdie putt had 3 feet of break in it, and Varadan poured it in, building on the success of going to the arm-lock putting style at the recent Conference USA Championship, where he was runner-up.

“He has broken through that glass barrier with his putting, and that was holding him back,” said UAB assistant coach Ryan Heisey. What impressed Heisey most about Varadan? “I’m real impressed with how calm he stays, even when he got into some places out there that were not ideal. He just focuses on the next shot. Calm. That’s how he is. You can’t tell if he is 5 under or 5 over out there, and that’s a good quality to have.”

Even with a bogey at 18, Varadan turned in 32, leaving his closest competitor, 36-hole co-leader Timothius Tamardi (Appalachian State) five shots behind. Varadan went to his final hole (the par-5 ninth) at 4 under, tried to reach the green in two, clipped a tree, got a bad kick and finished with a double to shoot his second 2-under 70 on the Stadium. The last hole did little to dampen his spirits. He didn’t have much time to celebrate. He had an 8 a.m. tee time on Thursday at a U.S. Open local qualifier in Panama City.

“You know your game is good when you’re playing well on golf courses like this,” said Varadan, who is from Malaysia. “I really wanted to test myself this week. I’m pretty impressed … It wasn’t my best stuff, but finishing under par on a golf course like this, it’s a bit of good golf.”

The Men’s Division II Team Division went to Alabama’s Miles College, which placed three players, including medalist Anthony Lumpkin (76–231), inside the top 10. Medalist in the Men’s Division 1 field was Howard’s Gregory Odom Jr., who competed this week after losing his father, Greg Sr., to liver complications back home in Memphis on Saturday. Odom, a junior, told his coach he wanted to stay and compete, and his mom thought it was best, too. It is the first title of any kind for Howard, which restarted its golf program just 13 months ago with the financial backing of NBA All-Star Steph Curry. Coach Sam Puryear has experienced many victories at many levels of college golf, but said none had made him prouder than seeing Odom win. He shot 74 on the Stadium Wednesday, finishing his week at 4-over 220.

“Not another player in this field carried a more heavy heart than this kid,” Puryear said of Odom, who was his very first Bison recruit. “To do what he did and hold your emotions in to the end, how do you do that? I just don’t know what’s better than that.

There were 23 teams and 52 individual players competing in five divisions at this week’s PGA WORKS Collegiate Championship, which brings together Historically Black Colleges and Universities, Hispanic Serving Institutions and Minority Serving Institutions. This was the 35th edition of the event, with the 2020 PWCC canceled because of COVID-19. On Sunday, student-athletes took part in a Career Expo at the new PGA Tour Headquarters.

It was the final stop of the spring for many teams, but Prairie View A&M isn’t done with its season, as Wednesday afternoon it received its Regional bid to the NCAA Championships, representing the SWAC. The Panthers will play May 17-19 at the University of New Mexico, with momentum on their side.

Coach Jennings boarded a charter bus with the team on Wednesday evening in Ponte Vedra Beach, hoping to get as far as Mobile, Ala., to break up the 14-hour ride home to Texas. For Jennings, the journey will be extra special having that PGA WORKS Collegiate Championship trophy by his side. It had been a week he won’t forget.

Given the venue and the overall spirit of the competition, it was that kind of week for many student-athletes, too.